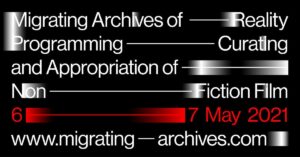 The digital turn, which has created new modes of access and circulation for films, underscores and amplifies what has been the fate of non-fiction film since the beginning of its existence – it has always been, and continues to be, a migrating archive of reality.

Find further information and register on the official conference website

The European research project “VICTOR-E: Visual Culture of Trauma, Obliteration and Reconstruction in Post-WW II Europe“, which was launched in May 2019 and runs for 3 years, examines the debate on reconstruction in post-1945 Europe using newsreels and documentary films from the years 1949 to 1953. The hypothesis on which the project is based is that these films not only presented the development, but also made a massive contribution, since in democracy public spaces are of central importance, and thus also their presentation in the media.

Coordinated by the Goethe University (Frankfurt/Main), research institutions in Italy, France and the Czech Republic are also participating in the EU-funded project. Associated partners of VICTOR-E are film archives from the same countries, including the DFF, which will give access to their holdings and collections to the researchers and – where legally possible – digitise parts of them and/or make them available online.

In addition to making selected films available via the online portal europeanfilmgateway.eu, operated by the Association of European film archives and cinematheques, ACE, a key result of VICTOR-E will be a specially created virtual exhibition that will present research results and contextualise films – for example with the help of interviews with contemporary witnesses. Both, the films and the virtual exhibition are expected to go online towards the end of the project, probably at the beginning of 2022.

Frankfurt is an ideal location for this film studies research: The city on the Main River was badly destroyed, and debates about reconstruction vs a new beginning have been held here as in few other cities in Europe. The research focuses on public places such as the city hall Römer in Frankfurt, marketplaces or politically relevant squares. Both formal and substantive aspects will be investigated: How many aerial photographs are there? Can recurring elements be identified? Are there symbols that recur in the debate? What effect has the film reporting and documentation had on the debate? And what are the differences and similarities of those debates and films between the various European countries?

VICTOR-E is funded by the HERA Joint Research Programme which is co-funded by BMBF via DLR-PT, CAS, ANR, MIUR and the European Commission through Horizon 2020.