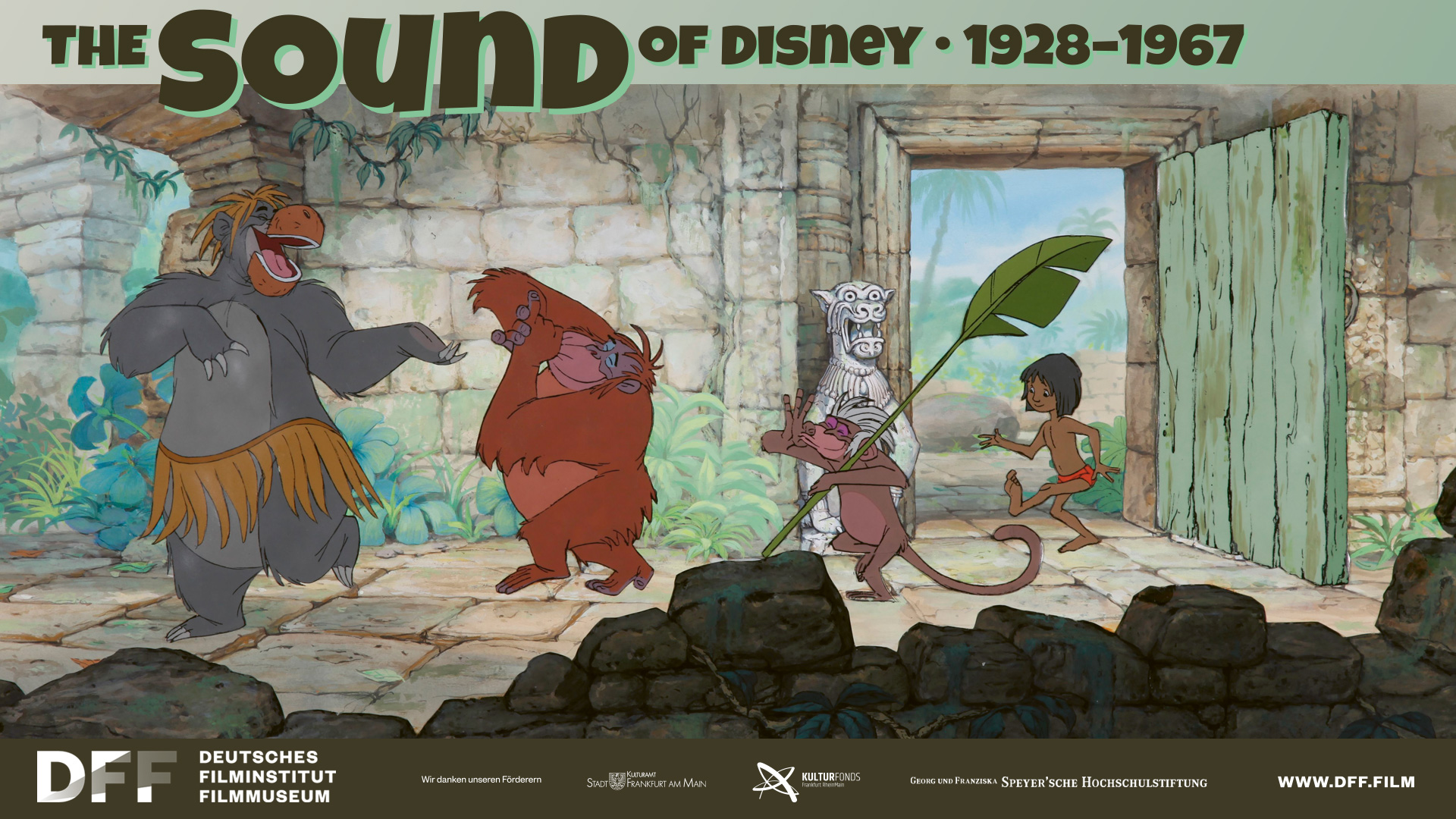 Special exhibition of the DFF – Deutsches Filminstitut & Filmmuseum on the world of sound in classic Disney animation films from 1928 to 1967.

Sound is the motor and soul of animated film. Walt Disney, who already started animating short movies in the days of silent film, was one of the first to understand this and went on to become the most important producer of animated film in the world.

With The Sound of Disney the DFF presents an exhibition which explores the use of music, sounds and dialogues in the original versions of the films as well as in many dubbed versions. The period focused on ranges from short Mickey Mouse cartoons and the popular SILLY SYMPHONIES series from the 1920s and 1930s to the feature-length masterpieces created during Walt Disney’s lifetime (1901 – 1966): from SNOW WHITE AND THE SEVEN DWARFS (US 1937) to THE JUNGLE BOOK (US 1967).

Walt Disney was a perfectionist enthusiastic about animation. He set standards in film history – in 1928 he released the first successful animated sound film, in 1932 the first cartoon printed in three colours by Technicolor, in 1937 the first feature-length cartoon – and won countless Oscars® and other awards. His name became a brand, his studio a global corporation.

He is famous not only for his most well-known invention, the Mickey Mouse, but also for the unique fusion of sound and image in his first sound film STEAMBOAT WILLIE (US 1928, D: Walt Disney / Ub Iwerks) as well as in numerous subsequent films.

“The DFF’s exhibition, The Sound of Disney, is aimed at people of all ages and backgrounds,” emphasizes curator Daria Berten. “It offers an interactive experience that makes the meaning of voices, music and sounds in animated film tangible.” A large-scale sound installation, numerous film excerpts in various languages, media stations and exhibits of high show value display a cross-section of the studio’s artistic work.

The interactive stations with additional content and background information meet all current hygienic requirements and can be used safely during the corona crisis. Alternatively, visitors can also use their own portable devices with headphones and access the stations’s content via QR code.
Flyer (in German, PDF, 1 MB)

Find information about online tickets as well as our hygiene concept here.

Due to the current Coronavirus-related restrictions we can only offer a limited amount of tickets per time slot. We recommend to buy your tickets online in advance.

*Reduced tickets for: pupils, students, unemployed. The discount does not apply to students of the university of the 3rd age U3L.

KUFTI pass holders, kids under the age of 6 and birthday kids of all ages get free admission to all exhibitions.

Accessibility: The DFF – Deutsches Filminstitut & Filmmuseum is accessible for visitors with restricted mobility and for guests with prams via an elevator at the right side entrance of the museum. Lifts in the foyer provide barrier-free access to all exhibition floors, the cinema in the basement and the film workshop and workshop rooms on the 4th floor. A restroom for wheelchair users is located on the lower level. A rental wheelchair is available.

Use of Interactive Stations in the Corona Crisis

The interactive stations with additional content and background information meet all current hygienic requirements and can be used safely during the corona crisis. Alternatively, visitors can also use their own portable devices with headphones and access the stations’s content via QR code.

The public guided tours are included in the exhibition admission fee. Please register for the tour via museumspaedagogik@dff.film or call +49 69 961 220 – 223.

Accompanying Programme with Guests at DFF

Find information on early bird tickets as well as on our hygiene concept here. Patrons may remove their face covering when seated in our cinema.

Special Events At Other Venues

Senckenberg Nature Museum Frankfurt
Saturday, September 19, 2020, 4:00 p.m. & Sunday, November 22, 4:00 p.m.
Dr. Sebastian Lotzkat (Biologist, Stuttgart Natural History Museum)
«The Sound of Disney @ Senckenberg – from Hei-ho to habdibudibubao»
Guided Tour
«Look for the Bare Necessities» once sang the casual bear Balu. And he wasn’t alone: ​​Various animals in animated films from Disney have delighted generations with their vocal interludes. Today the biologist Sebastian Lotzkat visits such singing Disney stars in the Senckenberg Nature Museum. During his tour, he invites you to get to know them a little better and to listen to their songs – live and unplugged!
Duration: 1.5 hours
Entry: 12/8 Euros
! Note: Registration only via the event calendar of the Senckenberg Nature Museum at museumfrankfurt.senckenberg.de. Participants in the guided tour receive the reduced price for the «The Sound of Disney» exhibition.

With thanks for the good collaboration

Concert
More than just humorous cartoons: With the «Silly Symphonies», Walt Disney laid an important foundation for his cinematic work between 1929 and 1939. The result was 75 creative short films, multiple Oscar-awarded, whose character drawings, storytelling, camera technology and, above all, the precise use of musical effects continue to shape the art of animation to this day. To round off the «The Sound of Disney» exhibition, some of the pioneering «Silly Symphonies» will be shown, such as «The Skeleton Dance», «Three Little Pigs» and «Flowers and Trees». The Neue Philharmonie Westfalen accompanies the short films live with the respective original pieces of music. Media curator Michael Kinzer hosts the evening.

Tickets: 37/47/56/66/76/86 EUR
! Note: Tickets can only be obtained from the advance booking offices of the Alte Oper Frankfurt and at www.alteoper.de.

With thanks for the good collaboration

Accompanying our exhibition, we are showing a film series in the DFF cinema. Find an overview of films and screening dates here.